Huzzah! The fruits of labor have finally been brought down to me from the Heavens!

A couple of weeks ago, I started growing a dill plant straight from the seed! I almost never start from a seed, and when I do, it usually doesn’t work. I’m so excited! I have a bunch of other seeds for different plants that I’m going to start to grow this afternoon. They’re easy things like other spices, microgreens, strawberries, and of course flooooooooowers! Starting a garden really makes it feel like Spring!

The Maze Runner by James Dasner

This book blew my mind! I picked it up during reading time in my LAnguage Arts class just because I’d forgotten my other book for the day, and this book just lept out of the pages and hooked on to me. I could barely put it down!

The Maze Runner, in my opinion, is like a phychological action-thriller. Jam-packed with monsters and secrets and huge shocks. Every chapter was more stunning than the last. By the time you get about 2/3 through it, you just have no idea what could happen next! It’s just perfect!

Is this book a movie yet? I sure hope so because I’m going to go see it next weekend if it is. I’ll also be running to the bookstore to get the sequel.

I’m going to be taking a few holiday breaks from blogging. Like, I just got back from my big Thanksgiving Break and soon I’ll be going on a Christmas Break. Just to let yous know.

While we’re on the subject, Happy (late) Thanksgiving! My holiday was nothing spactacular, but it was still fun! Unlike the rest of the country who had a week off of school, I had Wednesday, Thursday, and Friday off along with the weekend. Boy, have I been looking forward to that! It was lovely not having to get up and just being able to enjoy this nice weather and go to a park and not worry about if I’m going to get my homework done!

During the day, all everybody was doing was cooking and preparing for the feast that awaited us. Also, me and my brother decorated with hand and feet turkeys. I’m sure everyone’s seen a hand turkey, but feet ones are pretty weird looking.

For Thanksgiving dinner, we had three times as much stuffing as we thought would come out, potatoes my brother made all by himself, canned cranberry sauce, my mother’s coleslaw with an entire jar of mayonnaise (60 servings? More like 10!), my secret recipe candied sweet potatoes with a super-sweet sauce, and a big, fat scrumptious turkey that had spent the night brining so it would be nice and juicy and plump the next day.

This one of the easiest pretzel recipes I’ve seen in a long time. Everyone should have a homemade pretzel at some point in their life. They’re just so classic! My idea would be to make a big, gigantic bunch of these and take them to a picnic at a park or something of the sort.
Creative Noshing is probably my most favorite cooking blogs, you should check it out!

Yesterday I shared with you the buffalo wings that we had for our appetizer supper. They were awesome, but we also had a soft pretzel with cheese sauce on the side. Equally delicious.

I have been planning to try these for a while. A tattered piece of paper with this recipe on it sat in my kitchen for months. It happens, I tear items out of magazines and throw them into a holding pattern for months at a time, waiting until the “perfect” moment, or most likely when it happens to fall in front of my eyes again during a cleaning spell.

Months ago, I tore this from a penzey’s magazine, after showing it to my husband who voiced his interest. To my surprise, when I returned from yoga class the other night, he had found this recipe and made the dough. Yep, he’s a keeper.

Then we whipped up a simple… 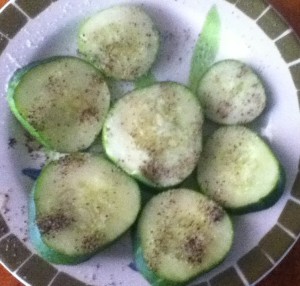 Whilst I was reading Esparanza Rising by Paul Munoz Ryan, earlier this morning, there was a part in the story where Esparanza and her family are on a train and they stop for some food. They all get Pepinos. What is a pepino? You may wonder. It’s delicious, that’s what it is.

Slice up cucumber into medium to large slices. Sprinkle salt and ground chiles or pepper onto the slices. Buen Provecho!

It was my dad’s birthday last Wednesday, so me, my brother and my mom made him a cake. A strawberry lemon cake, to be precise. Now I will teach you how to make this elegant dessert.

For the cake I just used a Betty Crocker mix of Lemon Cake and followed the box directions.

A medium to large bowl

A Stirring utensil such as a whisk

Directions, Put cream cheese and butter into the bowl and stir until well blended. Spread icing mixture onto the top of the cake. Place strawberries all over the place. Slice into pieces and serve. This cake is good hot or cold, I would prefer cold, though.

For dessert a few nights back, my family and I made these Rice Krispy Treats. Except instead of Rice Krispy’s we used Cheerios that had been laying around the kitchen forever because nobody likes plain Cheerios by themselves. 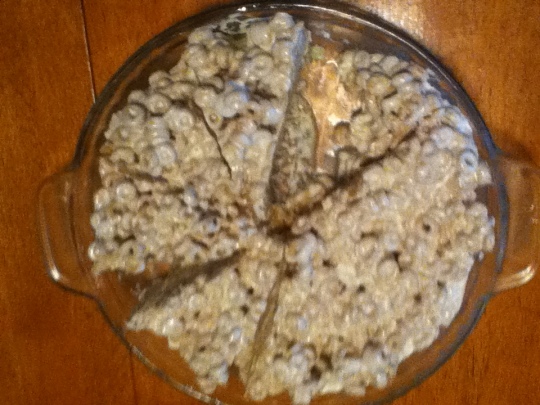 I’m not sure how good it looked, but it was pretty tasty. 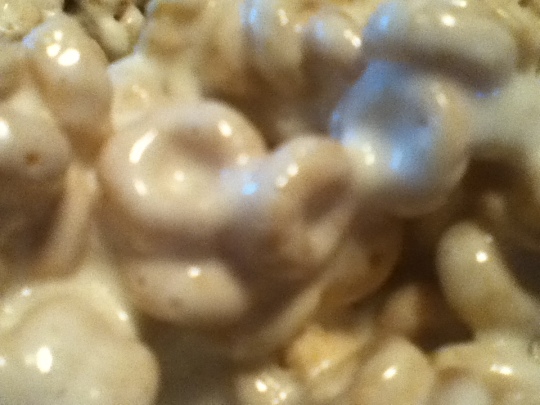 Here you can see all of the marshmellowy glaze on the Cheerios. It looks pretty good now, doesn’t it?

The only problem with this was that while everyone was eating, we tasted something weird. Soon, we had come to the concensus that this recipe would have tasted alot better, if the Cheerios hadn’t been stale. Eww.

In case you want to know how to make this dessert, it’s exactly the same as Rice Krispy Treats except when it says put Rice Krispies in, just put in Cheerios. Finally, keep in mind that Cheerios have waaay more vitamins than Rice Krispy Treats, too, for your children and such.

Last night for dinner I helped my dad make these barbeque chicken kabobs. We also had lentils over rice and cornbread with it, but I was too busy eating it to get a picture of it, :).

My mother switched her days off to Thursday and Friday instead of Saturday and Sunday, this means that today we got to do a ton of stuff! To start off our day, me, my mom, and my brother took a walk all over the place in my neighborhood. So far we got to play at two different parks and go into the Civic Center, I think it is, and those places are all kind of far away from each other. We were out for two hours straight! I was surprised by how cool it was outside this morning, 83 degrees or something like that. Also, all I was running on that morning was a giant glass of orange juice so when I got home I was starving!

The next part of our day was finding out where to go out and eat, after taking good showers first, of course we had been sweating like pigs all morning. We decided to go to Denny’s again, but this time a different location. We usually go to the really busy one down by where the interstate gets off, but this time we went to a much quieter one. Personally, I didn’t like it. At the other Denny’s all of the people that work there know us because we’re such regulars and are extremely chatty and nice. The people working here looked and acted like they all hated their jobs and it was sending terrible vibes out to the customers, I could just feel it. Also, the food didn’t taste too good, either. In fact I could barely stomach my eggs, they tasted like plastic, but I was so hungry from the walk I just scarfed it down. Another thing was my brother said his pancakes tasted like onions and, from restaurant working experience, my mom knew what that meant. They probably didn’t clean off the surfaces where they cooked the pancakes before putting them on there. Finally, I found the restaurant really quiet, like too quiet. I felt like I was in a library.

Third, to burn off all that Denny’s, we went bowling! Our location was DeLuna Lanes. It’s not nearly as popular as Oops Alley, which makes it really cool because we’re usually the only people there with maybe one or two other groups. It’s alot cheaper, too. $2 a game! I don’t know how they stay in business! I got into last place in the first game with, like, 24 points. Then in the next game I came in second with 64 points. I could have done a ton better, but, did I mention we were playing without the gutter rails?

Afterwards, we went to Publix to do some shopping. It was the Publix that didn’t have free samples but had crazy low prices, so it was good. We got things like milk, Quaker Chewy Bars, cat food, banaynays, Cheerios, and some meat for a pot roast tonight. Not that exciting, but I did learn something, one of my buddies’ mom works there and I said hi to her.

Later on, we might go out for a bike ride, but, it looks like it’s going to rain, so we’ll probably stay inside.

What I Had For Breakfast!

I felt like being a photographer this morning so I photograhed my breakfast:

And some Froot Loops! 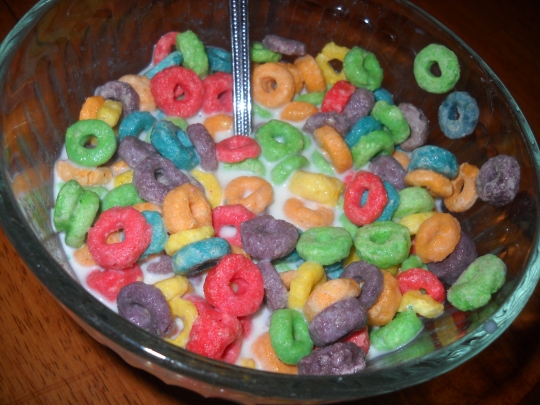 Tonight we had dinner. More specifically, we had tortillas.

4) Place flour tortillas on the griddle

7) Start cooking your choice of meat or tofu. I chose filet mignon.

The are some pictures of one of the best cakes I’ve ever had! Orange Creme Cake topped with Chocolate Frosting. MmMmMm!!!

Tell me this doesn’t look delicious!

This blog is about many topics! Some of those topics are cooking, gardening, photography (That's a BIG one!), reading, school, and lots of other things.
Thanks for looking at my blog. Like and share any posts you want and don't forget to follow me.
Please Enjoy!

What Are You Looking For?

The Art and Craft of Blogging

Fears, worries, and screaming pathos of a college drone

A Day in the Life of Shareen A.
baileydancer117

My blog
Writing: A Conversation Without Interruptions
clotildajamcracker

The wacky stories of a crazy lady.

Poems and stories of love & heartbreak.

through the darkness there is light

Proud to be a sass-mouth!

It's about the journey

The worst thing that could possibly happen to anybody would be to not be used for anything by anybody. Thank you for using me, even though I didn't want to be used by anybody.

slightly cracked observations and unsolicited advice on bending the rules and being yourself...and butterflies

The latest news on WordPress.com and the WordPress community.